How Sugar Ages Your Skin

We’ve all heard of blood sugar. The blood glucose, or blood sugar, level is very important. If it drops below a certain point a person can lose consciousness, or fall into a coma, but high blood glucose is also harmful, as most people know from hearing about diabetes.

What many people don’t realise is that blood sugar plays a massive role in the ageing process. Glucose is a substance that can cause serious damage to cells and tissues when it reacts with proteins, DNA, and other important molecules. This is called Glycation, which used to be a skin condition found mainly in the elderly. Today, while it’s still linked with ageing, it’s being diagnosed in younger and younger skin. When you realise what causes glycation, it becomes obvious why younger people are suffering from this.

Simply put: too much sugar in your diet causes Glycation.

Glycation is linked to hypoglycaemia and the consumption of highly processed foods and fast foods. Hyperglycaemia is a dietary problem which is becoming more and more prevalent in today’s society. Although glycation is a natural part of the ageing process, and its severity depends partly on the inherited strength of your skin, it can be intensified by too much sugar in your diet.

If you have high levels of blood glucose, the haemoglobin in your skin tends to darken. The glucose also attaches to proteins in places it doesn’t belong, and your skin produces advanced glycosylation endproducts (AGEs). This leads to skin deterioration consistent with ageing.

How do you recognise Glycation?

Collagen is a protein which has three strands coiled around each other like a cable. It is curly and springy. That’s what makes it flexible. But when glucose attaches to collagen, it forms little bridges and links between the strands of molecules. These multiply, and the collagen’s flexibility disappears. These bridges and links also grab onto passing proteins and trap cholesterol and sugars. This is glycation.

In this diagram you can see how the collagen and elastin fibres contribute to the outward appearance of glycation. 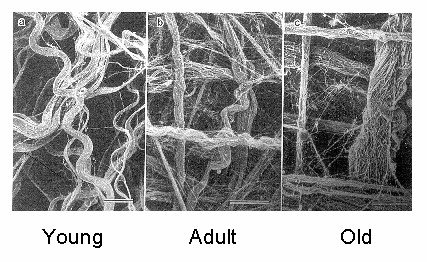 In young healthy skin, the collagen and elastin fibres are curled. This gives the skin flexibility. As you get older, glycation makes the collagen and elastin stick together, and the curl becomes less, and loses its flexibility. This becomes more and more pronounced with age. It’s most often apparent around the mouth and eye areas, which become hardened and less flexible. Wrinkles which are caused by glycation are crosshatched and complex. They’re not like expression lines, which are more horizontal.

When the glucose attaches to the protein, it can impair the function and disrupt the proper working of the cell. Attached sugars make proteins in the body more likely to solidify and become non-functional, and less likely to be broken down by chemicals designed to destroy damaged molecules. In fact, solidified proteins stick together into large masses, which can be seen in the brain in Alzheimer’s disease.

Glucose can also bind to DNA. That means that in cells such as those in the heart and brain, AGEs accumulate. This could disrupt the production of new cellular proteins, could interfere with the repair of DNA, and could even cause mutations. Glucose can also react with other chemicals in our bodies in detrimental ways. It can even affect cell division. When this process lacks proper regulation, it can lead to cancer.

What can be done about Glycation?

It’s nice to know that the body has its own defence system against this cross-linking. It has immune system cells called macrophages that combat glycation. They have special receptors for AGEs, which seek them out, attack them, break them down, and eject them into the blood stream where they are filtered by the kidneys and eliminated in urine. It’s not infallible, however, and as people age this defence system itself begins to break down.

So what does this mean for our health as we age?

Research has discovered that there are some treatments for Glycation.

How can Skin Correctives help you?

As your skin gets older, there are numerous conditions which can affect it. Each of these conditions has a separate cause and a different treatment solution. That’s why, as your skin becomes more and more affected by age, it’s very important to attend a professional beauty therapist such as Skin Correctives.

The professionals at Skin Correctives will be able to diagnose the exact condition or conditions that are causing your problems, and will be able to treat them correctly to achieve the best results for you.